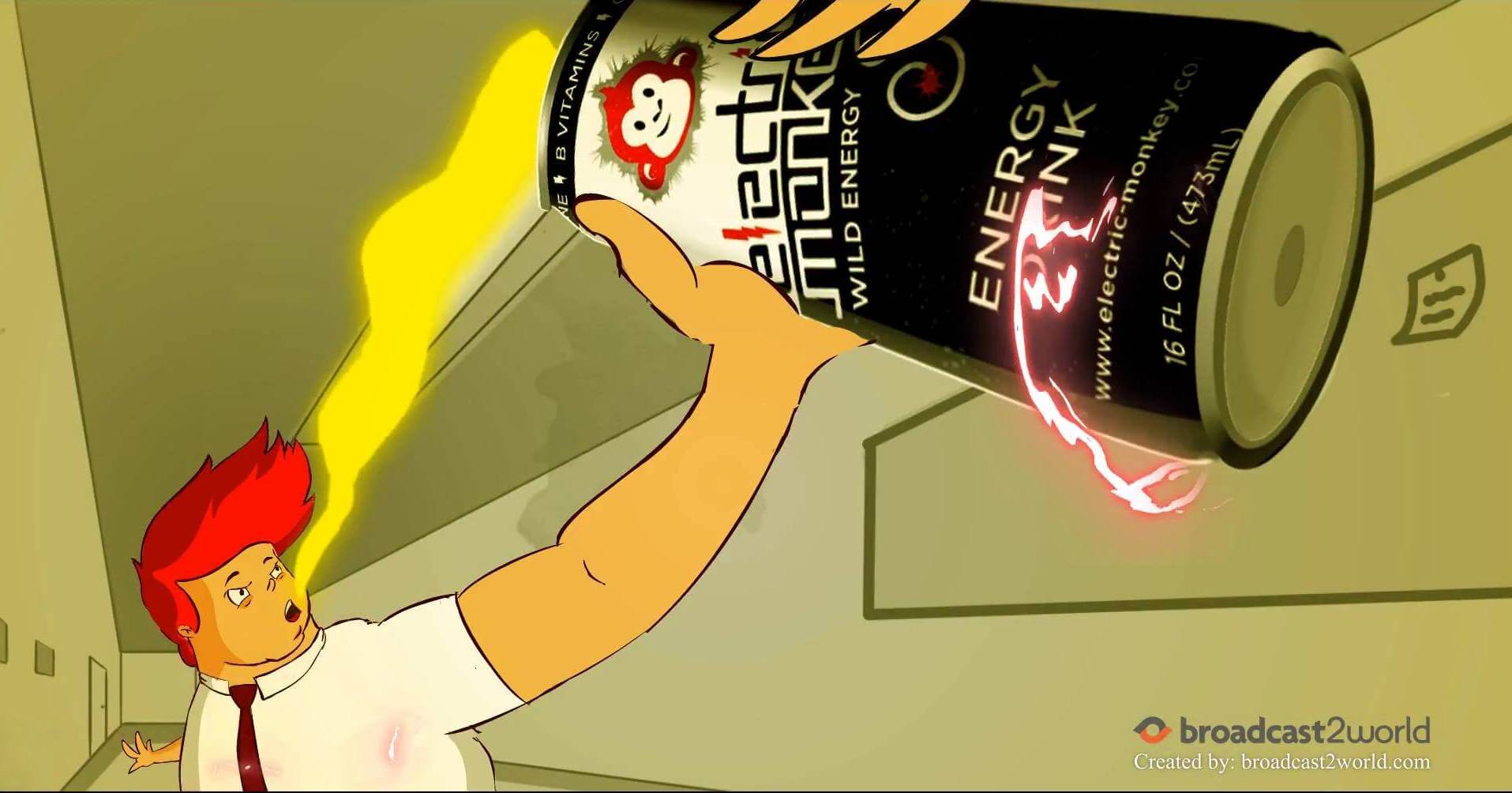 Query: “I am looking for  a 15-30 seconder animated commercial for my energy drink company!”

Business Profile: Electric Monkey (EM) is an energy drink brand, which came into being in the recent past. The company is on an upward trajectory to establish its foothold in an industry dominated by brands like Red Bull, Monster and Rockstar.

Electric Monkey energy drink is the perfect blend of classic energy taste and light carbonation, making it the go-to drink for getting any party going!

If you may ask how is it different from other energy drink brands, here’s what Electric Monkey says about itself: "We don’t have a Formula 1 team, nor do we have an astronaut jumping from a satellite, but what we do have is the flavour that energy drinkers LOVE."

However, as this was their first real video - there were some apprehensions as to what approach could be the game-maker and the game changer for Electric Monkey. Also, the bigger purpose was to create a  magnificent overall experience, which the viewers could cherish.

Challenges: Unlike most video inquiries that we get, where the objective is to impart education about the product/service, Electric Monkey was different. They wanted to create a stir among their target audiences through a light and funny video commercial that could bring the brand to the viewers’ “awareness” stage in the buyer’s lifecycle.

The major challenge here was to depict a situation where a person is consuming the drink to energize himself, while also giving the product ample screen space, all of it in less than 30 seconds.

Curating an animated commercial video that accomplishes all those goals was not easy, but we had a fun time devising an approach to it.

Approach: Taking cognizance of the industry EM competes in, and the kind of ads rolled out by its competitors, we knew that we had to curate a video that is different, likable, sharable and most of all makes people laugh and remember the EM brand.

We decided to use an animation style with line drawings and a sullen background to enhance the characters, actions, etc., to put more emphasis on what is happening on the screen rather than in the background. This way, we had the audience’s eyes, just where we wanted them to focus. Since the video had just 15-30 second to accomplish all the objectives the client came to us with, we devised an approach that will pay heed to all his goals.

What worked: After a couple of back and forths with EM, we curated a 15-second video that was quick, crisp, quirky and true to what EM drink is all about. We managed to show a popular use-case for the drink too.

What didn’t work: Initially we wanted to show a situation where there is more than one protagonist in the short video but we decided this will have less of an impact. The client concurred. Here it is anyway:

Traction: In an industry flooded with mega energy drink brands, Electric Monkey's animated commercials have made heads turn. The brand's choice of youthful characters, colors and relatable analogies, make these ads a feast for the eyes. Our counterparts from Electric Monkey came with delighted hearts, great feedback, and a requirement to get graphics designed for all merchandising activities of Electric Monkey. With four more projects in the pipeline, here's your sneak peek into the second animated commercial we made for them:

Our collaboration with EM made us realize a very important rule of the world of B2C video marketing: In order to break the status quo and to establish a foothold in an industry dominated by the 'Red Ocean' strategy, new brands ought to be great storytellers. If you are concerned that your story may not be different, then it is important for us to emphasize that not every story is unique, but every story has a unique way of being narrated to the world!

So, if you are a B2C brand, fine-tune your best product, identify your brand voice and tell visual stories in ways that get your consumers spellbound!

Previous Story
← Learn how healthcare videos can help you forge human connections!
Next Story
How Can Using Animated GIFs Win Hearts And Drive More Sales For Your Business? →