The Ultimate Secret To Growing Fast With B2B Videos

According to Web Video University, about 20% of your viewers would move on to something else within the first 10 seconds of your video. You have to make sure that your video is entertaining users at every frame.

What is B2B Video Engagement?

Video engagement can mean a lot of things for a lot of videos depending on the purpose they’re made for.

“There isn’t a single, reliable definition of what video engagement means to every player in the market. It’s affected by a variety of factors like the length of your videos and how you generally structure your video. Generally, however, video engagement is considered the primary factor that determines how much information viewers will retain from videos they watch.”

Let’s say your campaign aims at generating more brand awareness using b2b social media videos. You should be interested in how many times the video has been liked or shared by the target audience. Sometimes people focus on views, which can be misleading as they are bought. Instead,  likes and shares are earned, so they should be your metric of video engagement on social media.

On the other hand, if the campaign aims at generating leads, you might be interested in looking at the number of conversions on your landing pages where the video is posted instead. Thus the number of landing page conversions becomes your metric for video engagement. It can be as simple as an event of clicking on a CTA or filling up a form.

In the B2B world, videos are deployed largely on two platforms—landing pages and social media. The purposes of using videos on the two are quite different.

Videos on landing pages are usually directed towards conversions, keeping visitors on the landing page for a longer time, or showing how your product or service works (which helps in connecting with the customer better).

For example, this is a landing page we made for our edutainment campaign: 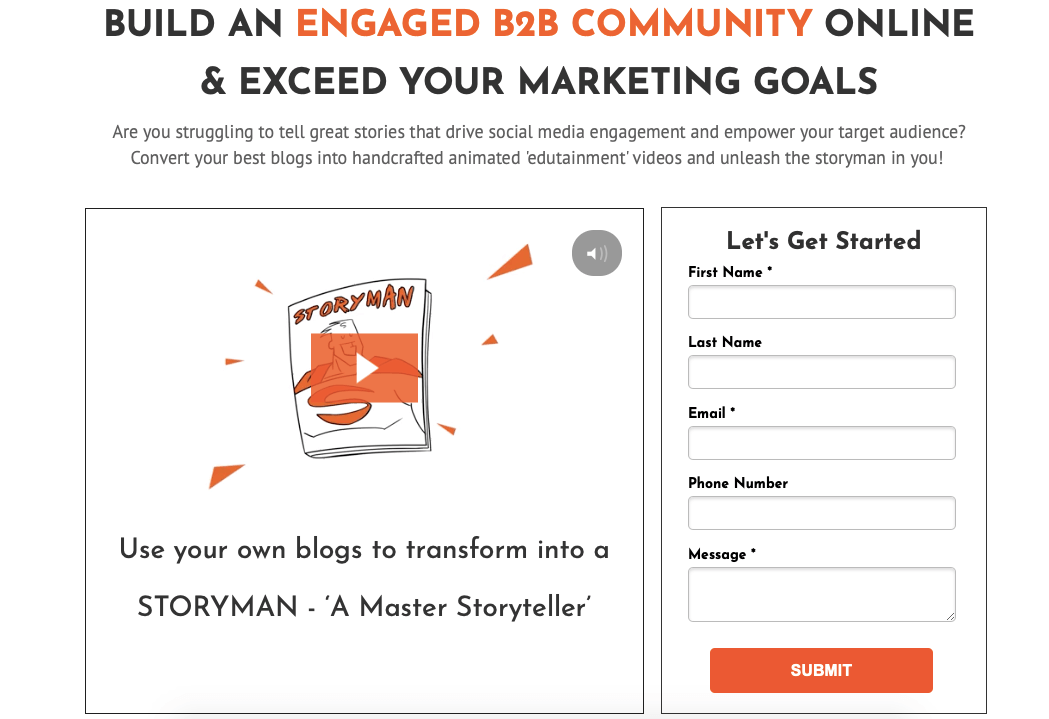 Our measure of conversions was the number of people who filled up the form.

On social media platforms, b2b videos have a different purpose. The videos out there can serve multiple purposes. While you would see a lot of companies trying to pitch their products and services on social media, entertaining and educational videos work much better on these platforms.

When it comes to LinkedIn, you need to focus on just two metrics—engagement and CTR. Engagement is all about likes, shares, and comments here, and you're already familiar with good old CTR. Both the metrics have important roles to play.

When running campaigns on LinkedIn, Average CTR can give you a good idea of which version of an ad is working better than the others. You then choose to go ahead with it and pause the rest.

Since you would be running multiple campaigns, you would need to compare the campaigns for performance and find the campaign which performs best. Once you have it, you pause every other campaign.

So, What’s Working on Social Media for B2Bs?

Competing for attention is becoming increasingly difficult on social media. With thousands of posts flooding your timeline and calling out for your attention, what makes you check any post out? That is the question that’s troubling B2B brands right now. It has been observed that edutainment videos are the perfect blend of everything necessary for your audience to hit that share button.

It is well agreed upon that time is the most precious commodity. People are cautious now, more than ever, about how they should spend their time. Hence when they are on social media and they find a post that is not only entertaining but also educational, they believe that it wouldn’t waste their time should they check it out. And if that post happens to be a video, viewers are even more likely to check it out.

So, videos that are both educational as well as entertaining are the ones garnering most of the views now. The rise of edutainment videos, as they can be called, signals towards the fact that B2B companies should be creating more top-of-the-funnel ‘awareness’ content in the edutainment format to share on social platforms. If done right and consistently, such videos have a definitive competitive edge for going viral.

How Do You Measure B2B Video Engagement?

As Facebook puts it, “Engagement is the best measure of how much your video resonated with your audience.” Facebook measures video engagement in terms of “likes”, “shares”, and “comments” on the original post and also tracks the same metrics for the reshared posts.

And that is just the social aspect of the journey—which caters to the goal of creating a community. For landing pages, on the other hand, video engagement caters to the goal of increasing conversions. Wistia lets you track your video’s performance on landing pages in a concise manner, letting you know of all that matters. It tells you about the average engagement on your video, the total number of plays, its play rate, and the number of people acting on your CTA. Moreover, you can see how your video performed second-by-second. You can see when people were most engaged and when they were least engaged.

With this information you can know for sure, the areas of improvement in your video that you can then improve upon in the next version of that video or in upcoming videos.

Should B2B Video Engagement Be Measured Differently For Landing Pages and Social Media?

Most visitors on your website know the industry. They might even know exactly what they need from you. This is primarily why explainer videos work so well on websites.

On social media, however, demand generation videos like explainers fail because more often than not, the audience is not interested in learning about you or your product. People like to strike a balance between entertaining and educating themselves on different social media platforms. Your videos should be made keeping that in mind.

Since your audience’s mindset is different on your website when compared with social platforms, the tracking metrics should logically be different too. Wistia can help you track video engagement for both landing pages and social media.

The best way to go about testing videos on social media is to make different versions of the video, each with a different beginning. You could imagine this to be A/B testing with a lot more options.

You would obviously want more people to watch your video, so you might want to look into ways of improving play rates. Let us help you out with that. To start with, place your video somewhere in the beginning. Remember how we placed our video in the landing page screenshot above? That placement is called the ‘hero shot’ in landing page lingo and that’s where you would want your video to be placed. It needs to be “above the fold” (another landing page term that means the area that’s visible without scrolling when you land on a page). Beyond that, play rates are bound to decrease. The width of the video also impacts the play rate. It has been found that videos having width ranging from 401 pixels to 600 pixels perform best. When it comes to height, it is best for the height to range between 301 pixels to 450 pixels.

Other things you could change about your video for it to get a better play rate is to change the thumbnail of the video and the color of the video player (something which Wistia supports natively).

What makes Wistia different is an interactive graph overlaid on the video with statistics on it. With those statistics on your screen, you get to know the exact parts of the video where views rise and fall. You could then make changes in the music, content, and visuals of the video. This helps ensure that viewers watch the video till the end (where the call-to-action lies). 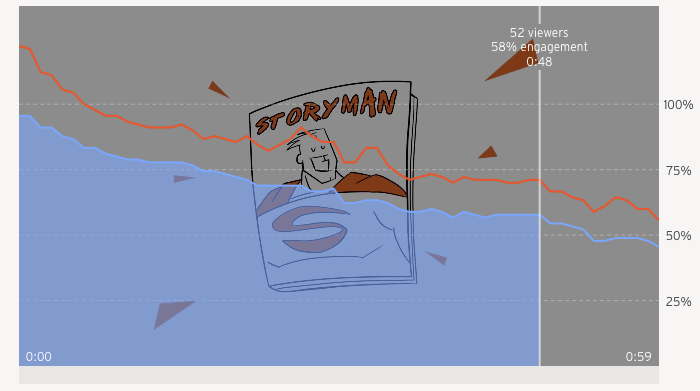 The overall trend you would see in the graph is downward—and that is normal for all videos. What you should be worried about are the dips. These dips indicate that people are moving away from your video at those spots. You could try tweaking the video’s audio and visuals to make the audience stay on the video longer during these dips.

Wistia also provides you with heatmaps that give you crucial information about the viewers. It tells you the location, device and the length of the video watched by a viewer. But that’s not all. It also tells you about how many times this viewer has been on your website along with information about the viewer’s engagement on previous videos watched.

Every statistic has a story. It is upon you, the brand, to find that story and use it to your advantage. It is only when engagement rates are tracked wisely and worked upon timely that B2B brands can see incremental results in the ROI of their video marketing efforts.

Higher video engagement rates signal an increase in the number of leads. It also signals an  increase in customer conversion rates while your lead-acquisition cost gets decreased. You would see better ROI on it than with other tactics. But the community of followers that your engaging videos generate is the biggest ROI you would see. Not only would these people see you as a thought-leader, but would also swear by your brand.

And there you have it, the ultimate secret to growing fast with videos.

We know, we know. All of this is pretty daunting and you might need some help with it. Let us help you get started!

Psst! We have many more informative articles coming up soon. If I were you, I would enter my email ID and smash that subscribe button at the bottom of the page!