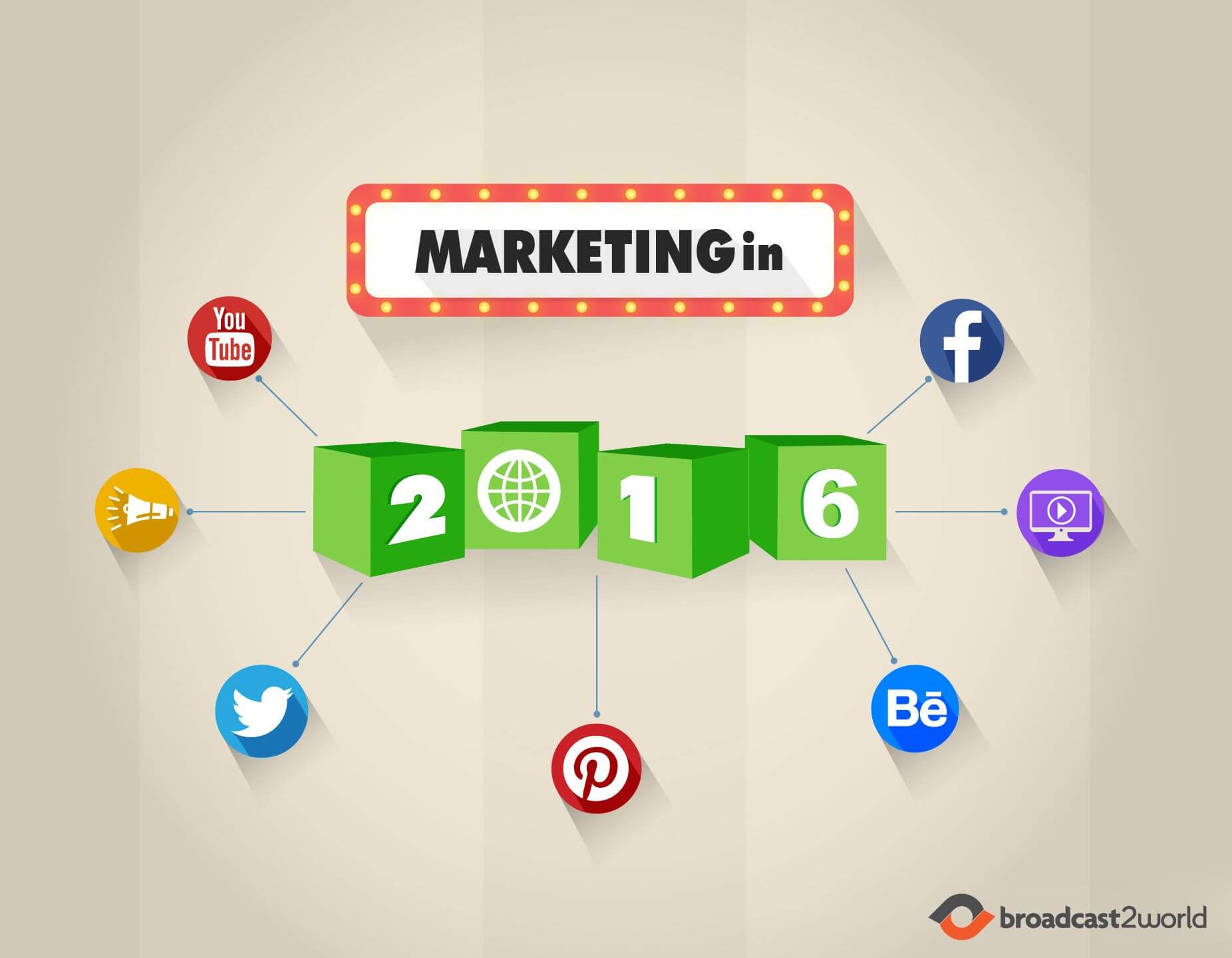 The Latest Visual Marketing Trends To Look Forward To In 2016

While banner ads will start to decline and podcasts will continue as a hot marketing technique, TV advertising budgets are going to be slashed by more than 10%.

This article discusses the marketing design forecasts that have been predicted for this year..

1. Interactive Videos will be the front-runners.

Yes, you read it right!

Interactive videos are believed to transform videos into conversions. They have transformed the whole viewing experience from a monologue into a dialogue. Marketers are now able to create a two-way conversation with their targeted audiences and achieve higher levels engagement on their content.  In March 2015, YouTube announced that the platform shall now support 360-degree video uploads, giving a special mention to Tomorrowland 2015 | 360 degrees of Madness”.[Source: YouTube Creator Blog]

Interactive videos provide power in the hands of the viewers. They let the viewer decide on the what course of action he wants to opt for. He might click on your 'engagement buttons' or may just play around with the content served to him. With many brands such as Tippex, Samsung, Rogers, commonfloors.com and many more tasting the interactive waters, we can expect to see more and more such creative and amazing interactive videos from great brands in 2016.

2. With Smart Phones taking over, video watching will change.

Moreover, with the prediction, that mobile phones, tablets, smart phones and tablets are likely to be used more for video watching this year, marketers are focused on spending more and more on mobile ads. Mobile phones are something that people are always glued to and thus, marketers are going to find better ways to target their consumers which are not usually available in other traditional offline advertising. More and more services like PressPlay.tv  shall be introduced to provide users with a seamless video streaming experience!

Also, this year can see more and more Vertical Videos coming into the picture. Hailing to apps like Meerkat, Twitter-owned Periscope and Snapchat, the media industry is beginning to take vertical video earnestly. Snapchat strongly believes that vertical video ads have up to nine times more concluded views than horizontal video advertisements. [ Source: Why Vertical Video Is The Man Of The Moment]

3.  Visual Storytelling Will Rule The Internet.

Also, there’s great news for those of you who want an impressive way for visual storytelling. Visual storytelling is predicted to continue this year with impressive videos, use of bold and bright color themes and typography. With an increased use of animated marketing videos in 2016, visual stories crafted as a part of marketing campaigns are going to help brands in passing on a clear message to their target consumers. Visual storytelling is a perfect way to engage and nurture engaged consumer communities and it’s going to help in communicating the brand’s philosophy and aesthetics.

And... and...and... the Google India campaign by the Google Search Engine placed all these emotions so well, that you tend to stick around that commercial. Google has appropriately inculcated the ‘’un-thinging’’  requirement of the commercials. With that commercial Google proved that you ought to add a personalized touch to your ads so that people watching it can associate with the your idea. All you have to do is to actually listen to your customers, and as Google did, you can as well leverage on your customer’s stories to push your company’s creativity.

4. 'Viral' will become an understatement!

In the last 3 years, Instagram post engagement has been increased up to 416%. Also, Pinterest and Tumblr, each gained more than 10MM visitors in 2015. Visuals are known to increase interest, therefore it is expected that videos will continue to attract visitors to social media platforms. In the year 2016, marketers will have to upload videos that are compatible across various multiple social media channels, the communications agency states.The focus should be on the visual angle of the social media industry, channels like Pinterest, Tumblr and Instagram which are expected to take make a big(er) impact than ever before.

Though the social media has been quite slow to adopt the GIFs but 2016 shall change it all, for good of-course! In 2015, the average human attention span was recorded to be 8.25 seconds. Yes, the attention span of people is dropping every passing year and with these reducing attention spans, animated GIFs shall come to rescue brands. They are almost perfect to tell a complete story in a really short span of time.

With Twitter allowing for auto-looped GIFs on their native video player, companies like Giphy and Tumblr are now making GIFs for the business for good amounts. Brands such as DiGiorno Pizza, Adult Swim, Starbucks and General Electric totally rocked the GIF game in 2015. And we expect to see more and more brands opting for the GIF game in 2016!

What sets an animated GIF apart is the motion in the image. That motion is capable of capturing the viewer's attention on an overly crowded News Feed. Companies will also replace their static ad banners with the animated GIFs intensively. Check out our blogs to see how animated GIFs are making our content look fantastic!

DELL, as we know slated the foundation for this innovation. It used simple animation GIFs and a few video frames and incorporated that into emails in order to raise the consumer engagement levels. And what this campaign did for DELL is something what every business strives for - a 109% lift in the revenue!!! :D :D

Their open rate raised by 6% compared to their quarterly campaign benchmarks. Not only this, they received a 42% increase in their click rate and 103% raise in their conversion rate! Beat that!

On the other hand Dove Real Beauty Sketches | You’re more beautiful than you think campaign was an instant hit worldwide. It attracted uncountable eyeballs and helped the  brand leaving a lasting impression on people's mind without actually taking about the brand itself!

Videos will make sure that you're providing an experience to your customers that is engaging and they want to click on. They'll be more than excited to open your emails!

These were some general predictions for Visual Marketing trends in 2016. Change is inevitable and marketers all over the world keep changing their marketing strategies and platforms with the changing demand. We hope every marketer would use these changing trends to their benefit.

Drop in your predictions and views on the marketing trends which, according to you are going to stay in 2016 in our comments section.

Previous Story
← What, Why and How of Video Blogging!
Next Story
How Product Videos Can Increase Your Sales →