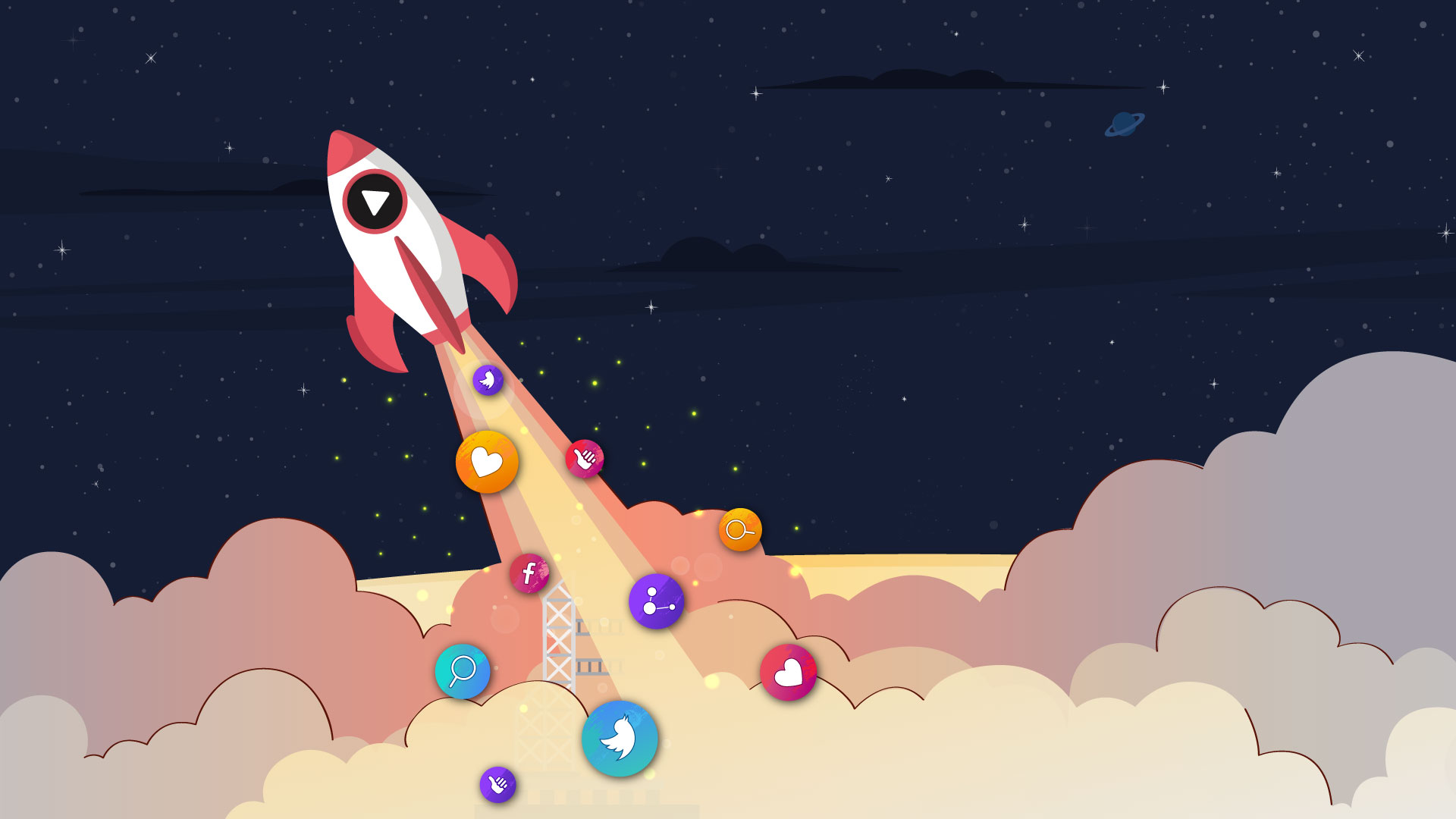 Originally published in 2010, this "The Man Your Man Could Smell Like" ad has had several viral moments over the past decade. It made a deep cultural impact at the time in an otherwise traditional advertising world.

This Dollar Shave Club ad is another classic example of an ad going viral:

Right after this ad, Dollar Shave Club gained 12,000 new subscribers (for its product) within one day. And in 2016, Unilever acquired this company for $1 billion.

So, it makes sense you want your videos to go viral as well. It can literally change the fortune of your company, unlocking unimaginable growth opportunities and success.

But here’s a problem: There are no defined rules on how to go “viral”. In fact, almost 99 percent of social media videos will never go viral.

So, the task at hand is incredibly difficult.

However, the good news is you can take cues from viral videos on social media, try to understand what worked for them, and then create videos accordingly. Learning from others who have already succeeded is a great way to go about this; it increases your chances of getting viral.

To help you get started on the right track and create one such rule book, here are 11 ingredients that make social media videos go viral:

Viral videos on social media stir emotions in the audience, which results in people liking and sharing them.

However, you don’t want to trigger just any emotion.

Yes, negative media does get more impressions and clicks. But that works best  in the news world. When you’re looking to build a strong brand, you want to build it around positive emotions like empathy and kindness.

A video that can make the audience feel happy, warm, excited, and surprised is more likely to get viral.

Think of the last viral video from any brand that you watched. How did it make you feel? What emotions did it stir that made you like that video?

So, make sure your social media videos have positive messaging.

2. They perform excellently in the first two days

The social media viral videos do great in driving traction in the first two days, which builds its “virality”, propelling its impressions and engagement.

Here’s what the Harvard Business review quips: “The more shares a video generates during the first two days after launch, the higher the viral peak and the greater the overall volume of shares.”

So the first 48 hours are very critical. You need to create a thoughtful video launch campaign that aims to gain as many views in the first two days as possible. This can include running paid ads, approaching influencers to share your video, and publishing press releases.

3. They have just the right amount of humor

This isn’t the case with all viral videos on social media, but it is true with a majority of them.

One reason why these videos get shared more and win mainstream attention is that they are funny.

Not all of your social media videos need to be funny. And more importantly, integrating humor into your content can be a surprisingly tricky challenge.

But if you can find opportunities to make your videos fun and share a good laugh, it helps your attempt at going viral.

4. They are a part of a relatable story

There’s nothing more powerful in marketing than a good relatable story. If people can relate to your message, many of them will follow your call-to-action.

Viral social media marketing videos do this exceptionally well. They tell enticing stories that the audience can relate to. This builds a connection between that brand and the audience, leading to higher engagement and inevitable conversion.

Make sure your videos have elements of storytelling. Using animation can be very effective here. An animated social media video can often do a better job telling a visually engaging story than traditional videos.

So, connect with a renowned services provider, work with their team and create your first social media marketing animated video that tells a great story.

5. They are visually striking

Whether it’s a live-action video, animation, or a combination of both (mixed media), almost every viral video of a brand you will see is visually striking.

They grab attention almost instantly and keep the audience glued with their visuals primarily.

So, if you want your social media videos to go viral, one of the essentials of that is visual appeal. The video should look good and be striking in visuals. If not, chances are nothing else will work.

With an animated social media video, you can achieve this easily. Animation is usually attention-grabbing that can stand you out from the crowd visually, enhancing your chances of going viral.

6. They have universal appeal

Do you think every single person who watches and shares Nike’s viral videos, also purchases their products? Not likely.

Many brand-driven viral videos don’t always have a targeted approach. Instead, they are universal, aiming to appeal to even those outside their target personas. This is the reason why Nike doesn’t make videos about  shoes alone; Coca-Cola doesn’t talk about soft drinks; and Dove doesn’t talk about soaps.

The viral video ads of these top brands are universal in nature with broader messaging. This allows them to gain more impressions and thereby, “virality”.

So when creating videos that you want to go viral, make sure it has a wider appeal that wows even those who aren’t necessarily your target audience.

7. They are in touch with reality

The brand-driven viral videos on social media don't usually revolve around fantastical topics. They tend to be grounded to reality, addressing real issues, pain points, or the circumstances of common people. This is one of the elements that build relatability.

Their topic is practical, an issue that people are aware of and understand.

As such, the core message of your social media videos shouldn’t be fictitious either. It should be reasonably in touch with reality so that people care about it and pay attention. This is important to initiate the snowball effect and gain more likes and shares from the get-go.

Many viral social media marketing videos are a result of topical marketing.

For instance, if the world is talking about Super Bowl, bridging that topic with your brand through a video can lead to the “virality” you’re looking for. If the messaging of the video is appropriate and has entertainment or educational value, it will likely gain higher visibility and more shares.

So, get together with your team to create an integrated video and topical marketing strategy. Make sure the video is relevant to a moment that the world is currently talking about.

Viral social media videos are usually engaging. They are positioned as a two-way conversation with the audience. Meaning, the protagonist of the video chats directly to the people watching it. The audience feels like they are being listened to and understood, not just yelled at.

This approach wherein people are talked to (and not talked at) builds a rapport and a connection between them and the brand. This often translates into higher likes and shares.

So, when creating a video, make sure your message isn’t conveyed in a generic way to a broader audience. It should be aimed at individuals, as though you’re talking specifically to one person.

With many examples of brand-driven viral videos, you will notice a lack of promotion. Even videos that talk about a certain product, you might not find a ‘buy now’ prompt at the end.

This is one of the key secrets of creating a viral video.

It’s unlikely people will like and share a sales-heavy video, unless it’s truly outstanding, as was the case with Dollar Shave Club. They don’t want a video that’s trying to aggressively sell them something; instead, they want a piece of content that provides them an entertaining experience or utility value.

Remember, getting viral is an ideal opportunity to increase brand awareness and not exactly to sell.

Avoid over-promotional videos if you want them to go viral.

10. They are rarely the first attempt

As mentioned earlier, there are no defined rules in this game. So nobody can say for sure how and when your videos will go viral.

But when a brand's video goes viral, it's usually not their first attempt. Chances are, they have published tens or even hundreds of videos until they finally struck gold and went viral.

This means consistency is key. Understand that your first or tenth video probably won’t go viral, and that's okay. You have to keep at it until it happens, and then keep going.

Once your brand starts getting more prominence and once you have more attention (and trust), the chances of going viral will multiply. There’s a reason why many top brands' videos go viral; because they have more attention and trust, from steadily churning out videos on a regular basis.

These are 11 secret ingredients of viral videos. Include them in your own videos and you can unlock the same traction.

But that said, understand that getting “viral” should never be the end goal. It’s a good-to-achieve goal that you’re okay with even if you don’t achieve it.

Your overall video marketing and social media marketing strategies should be tied to driving realistic results and not “let’s hope this one gets viral”.