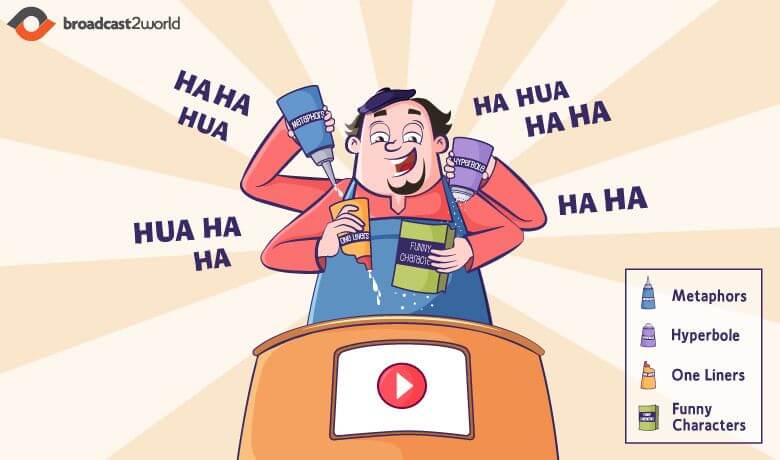 Not all explainer videos production are meant to be funny. However, while the choice of having a hilarious script and or for an explainer video depends entirely on the product or service, humor is certainly an invaluable tool for engaging an audience. Most online users are more accepting towards wit and humor than to a direct sales pitch. Looking for tips for explainer videos? Let us help you out!

Here are 5 tips to follow for creating a hilarious Explainer Video:

The first purpose of any explainer video creation is to make people understand your service or product in the simplest manner possible. Presenting a company or brand in a way that the target audiences can instantly relate to them is difficult. However, if the script writers give a deeper thought to the product, they can probably explain it using effective metaphors. If you can make your viewers understand one concept in terms of another, your explainer video gets a lot more fun to watch and yeah “humorous” too!

In this video, we did for Marketing Advocate the script draws a metaphor that relates marketing to fishing. The video starts with comparing a re-seller for bring brands manufacturers to a guy out for fishing. Marketing Advocate enters as a help and the video proceeds further to explain the product using an underwater scenario. Not only does the video get interesting with this approach, the viewers end up with a subtle laugh too!

2. Get comical and funny characters in your Video:

Funny is what funny does. If you have strange and amusing characters in your explainer video, everything that they do on screen would seem funny to the viewers. In explainer videos, we are bound by time limits. All we have are sixty seconds and in these sixty seconds we need to keep the audiences engaged. Just take a look at the video we produced for Pig Drive.

The video explains a service that lets you keep all your private data safe and secure. The way the central character of the script acts at different points of the video using hilarious facial expressions makes it a funny video. Though it’s a funny video, it doesn’t miss on the important points. That’s how humor needs to be used in explainer videos. Responsibly!.

3. Add humorous one liners right at the start:

You see them every day in your Newsfeed. They always make you laugh. Be it sarcastic or be it just speaking the truth candidly, a hilarious one line if added right in the beginning of the script can keep the audience laughing for the entire video. But do keep one point in mind. Don’t just add a funny one line joke in the script for the sake of having it. There’s absolutely no point if it doesn’t fit your script and you just added it to give some life to your dull script. But in case the script writer can come up with something that really goes well with your target consumer’s pain points, the video remains hilarious till it’s time for the call for action.

4. Deliver the truth without expression!

When you are not worried about telling the truth no matter how bitter it may be, you just say it with a plane face. The emotions and body language of the character don’t change while he candidly speaks just the right kind of lines to make his dead pan humor come across the audiences. You all have seen the Dollar Shave Club explainer video that went viral. It’s the perfect example of using dead pan in your script and video. It might not be easy to use in animated explainer videos but if you feel the product or service can make use of this genre of humor go ahead and try. You never know if it might just work wonders for you. See the Dollar Shave Club Video here:

Bringing rhetorical exaggeration to your explainer video’s script can work well. It’s engaging as well as humorous. It draws the viewer’s attention. Just like the explainer video for DirecTV did. Have you seen that video by the way? You got to see it. You’ll be left surprised and of course, in laughter. Hyperbole or rhetorical exaggeration of speech can make any story compelling and a lot more interesting. If the hyperbole you are trying to create doesn’t fit the cause of the video, kindly avoid using it.
Watch DirecTV’s hilarious video here:

Humor as a tool can be very powerful for a compelling and amazing explainer video if used responsibly and at the right time in the right manner.

What is an explainer video?

Explainer videos are online videos that are primarily aimed at explaining a defined idea, concept, or product. Generally, the length of such explainer videos is short. However, the length can vary depending on what is being explained and which consumer segment is being targeted.

What are the different types of explainer videos?

If done right, explainer videos are very effective, especially in driving top-of-the-funnel attention. Of course, the effectiveness of the explainer videos depends on what type they are, how the quality, and how relevant they are to the target audience. In all, with the right video production company by your side, you can create an explainer video that better explains your product or brand stories. It can drive you great results.

How do I make an explainer video for free?

If you’re making a live-action explainer video, there’s no such thing as “free”. You will have to put money into it. If you’re making animated explainer videos, there are a few tools that can help you with these. These tools come with a free plan. Note, however, that such free plans are very limited and you would eventually have to upgrade to paid plans. In addition, if you’re really serious about quality and effectiveness, you should create explainer video with help from an experienced video production company.

How popular are explainer videos?

What are the benefits of explainer videos?

Explainer videos are great to explain ideas, concepts, and products. They are great to tell stories. They pack plenty of direct and indirect benefits, including attracting attention, driving engagement, boosting brand recall, building lasting relationships with the audience, enhancing value proposition, and eventually increasing conversion (leads and sales). These explainer videos can fit at any stage of the marketing or sales funnel. So, leverage the power of informational and funny explainer videos to unlock limitless benefits.

What makes a good explainer video?

This article would have hopefully given you a little insight into how a funny video can engage your audiences quite effectively.