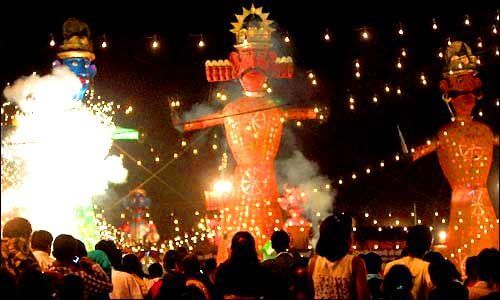 Dussehra: The Victory Of Goodness Over Evil

Also known as Vijayadashmi, Dussehra is one the major Indian festivals celebrated in India on a very large scale.  The day is celebrated to immortalize the killing of Ravana by Lord Rama. Dussehra, this word is an adaptation of the sanskrit word Dasha-hara which simply means the defeat (Hara) of Dashanan ravan or Dasha referring to the victory of  Lord Rama over the ten-headed demon king Ravana.

It is postulated that the celebration of Dussehra commenced in the 17th century. At that time the king of Mysore gave orders to celebrate Dussehra on a magnificent scale. Ever since, Dussehra is celebrated with wholeheartedness, warmth, passion and energy. Several mythological tales are associated with this grand day.

Dussehra, the tale of Lord Rama and Ravana....

Once upon a time, in the Treta yuga there was a king named as Shri Rama. He was believed to be the seventh avatar of the Lord Vishnu. Due to some circumstances, Rama, along with his wife Sita and his younger brother Lakshmana had to go in the jungles for an exile of 14 long years. They started residing in a kutiya (a house made of bamboo sticks) and started living their lives peacefully.

One day, the King of Lanka, Ravana saw Sita. He wanted to take her with him to Lanka. But, he knew she was Rama’s wife and he wouldn’t be able to take Sita in Rama’s and Lakshmana’s presence. So, he wittingly made a plan and with his supernatural powers he created a mythical deer to attract Sita’s attention. Mesmerized by the beauty and magical fragrance of that musk deer, she asked her husband and her brother-in-law to go find that deer and bring it to her. As asked, they both went into the jungle to catch the deer. But before they go, they wanted to assure the security of Sita. So, Lakshmana made a boundary called Lakshmana-Rekha around their hut. If anyone from outside the hut would try to cross that boundary shall be burnt and meet his end.

In the meanwhile, Ravana adapted the look of a bhikshuk (a beggar) and went to Sita. Obviously, Sita couldn’t recognize him. The bhikshuk asked her for food and told her to come out of the hut to give him the food. In that process, Sita happened to cross the Lakshmana-Rekha. To her utter surprise, the bhikshuk changed his looks and got hold of her. Ravana could now easily abduct Rama’s wife Sita.

Post coming back to the kutiya, when Rama and Lakshmana couldn’t find Sita, they suspected her kidnap. They were able to figure out what might have had happen. Hence, they decided to go to Lanka and set Sita free from Lanka.

Lord Rama, his younger brother Lakshmana, & Hanuman with his massive army made a bridge of stones over the Indian Ocean to reach Lanka. What followed was a massive battle and finally Lord Rama killed Ravana. Sita was rescued by the undying efforts of Lord Rama, Lakshmana & Hanuman. This day when Lord Rama killed the Ravana was famoused as Dussehra which means the defeat of the ten-headed demon king. The day marked the victory of goodness over evil.

The entire narrative is recorded in the epic Ramayana, a Hindu scripture.

It is a strong belief that each of the ten heads of Ravana were symbolic of 10 sins.

They were Krodha (Anger), Lobha (Greed), Moha (Attraction), Kama vasana (Lust), Mada (Over Pride), Matsara (Jealousy), Swartha (Selfishness), Amanavata (Cruelty), Ahankara (Ego) and Anyaya (Injustice). They are the sins people perform in their daily lives and if they are able to overcome these, they achieve moksha, the ultimate victory which brings them closer to their inner self and the almighty.

We wish everyone a very Happy Dussehra. May all the negativity in your lives burn along the effigy of Ravana.

Previous Story
← Best Animation Movies You Would Have Ever Seen!
Next Story
Halloween Gifts - A Photo Blog →