Prequel: For Every ‘Live Action’ There Is An Equal and Opposite ‘Animation’

3D/VFX animation is an indispensable part of Hollywood production, there are productions that have absolutely no story, no sense of screenplay, but the manage to attract crowds with its impeccable use of 3D/VFX in their scenes. But, this post is not that, it is also not about movies that have cartoon characters, that which Walt Disney, managed to intersperse with his live-action scenes, starting with Mary Poppins, Fantasia, Song of South, Bedknobs and Broomsticks and Pete’s Dragon. Disney amazing audiences with his pen and ink work that seamlessly blends itself into the live action production has become the norm.

To set a stage to this post: It was 2005, after years of exile in India and limited access to cable television and Hollywood movies, I manage to break free and begin my sojourn in Singapore and under the tutelage of my British Boss. This is when I was introduced to Quentin Tarantino’s Kill Bill at wee hours of Midnight after one too many drinks that I care about to say. All I remember from the movie was it was Grindhouse-Western influenced, a lot of blood and gore and more importantly animation short that was visually stunning. This left an indelible experience on me. An Ardent Tarantino fan was born.

The animation moves me and of course, in the helm of my role in an animation studio, I am always seeking new sources of inspiration, productions that have challenged the norm. This post is about Quentin Tarantino and his use of ‘Japa’-motion in Kill-Bill. For those who don’t remember it, here is the story of O-Ren Ishii.

Fast Forward to my tryst with where I work now, I live to breathe and tell stories about animation. Netflix’s expansion happened and it was then I was truly able to appreciate this masterfully interspersed 7-min and 20-second piece into a movie that is influenced by Quentin’s life itself. You can see every genre he claims he adores, but his tribute to anime and the portrayal of the character is a lesson in animation and its impact itself.

The Treatment: As the bride (Uma Thurman) lies in a coma, her inner conscious narrates the story of the rise of O-Ren Ishii (Cottonmouth). This is where the story brilliantly transforms into animation. It starts with a scene, where her parents are murdered by Matsumoto, the Yakuza boss, the scene inundated with Violence and Gore, true to Tarantino’s love for blood, but also illustrates the emotions that O-Ren endured lying down helpless as she watches her family pillaged and burnt to flames. The shot where her mother’s blood creeps through the sheets and falls on her face and her suppressing her emotion to stay alive and the very same blood as a metaphor robbing of her innocence and close up of her eyes that shows her determination to exact revenge was only possible with the brilliant art direction which always remains the strength of Japanese Animation, remains etched in the viewer’s minds. 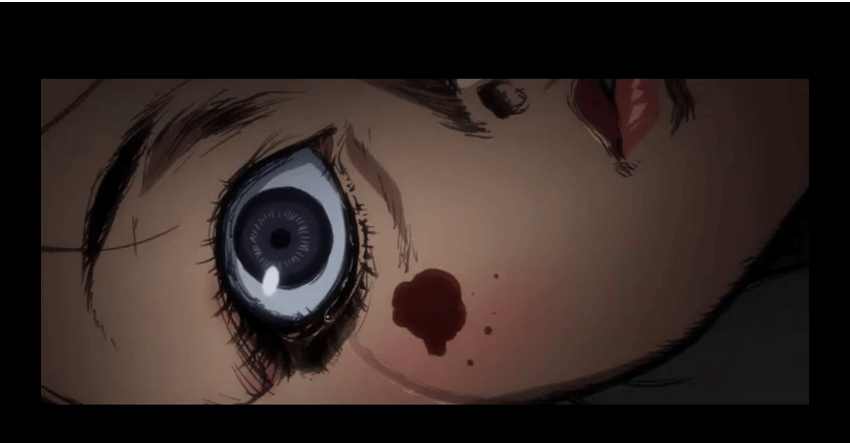 Helpless under the bed

The second part shows her exacting revenge, disguised as a schoolgirl and taking advantage of the pedophile that Matsumoto was, she plunges her sword with vengeance, yet waits to slow down to intensify the pain, that short moment of her revenge she looks into his eye, brilliantly shown as her reflection in that dying man’s eye before her soliloquy. 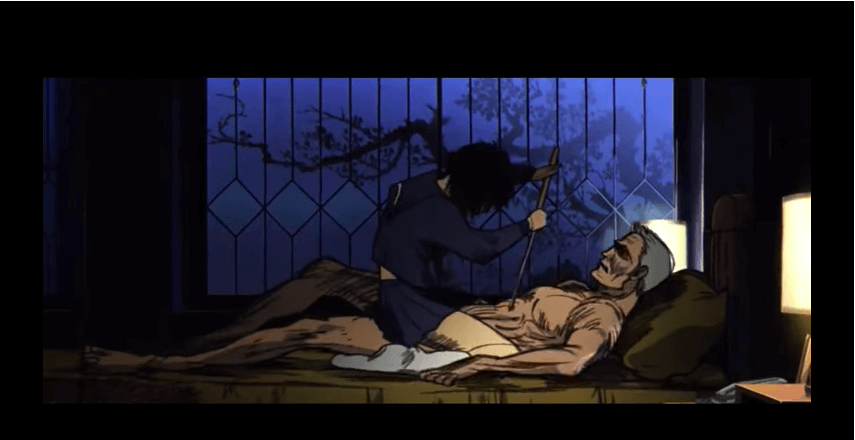 On Top in Control and Aspiring for Power

But, the metaphor of trapped underneath viz a viz being a top when she kills him, shows her rise, this is where Tarantino shines with his brilliance, that was impressively showcased by the animation team.

From a technical standpoint, what is even more impressive is that All this was hand drawn and digitally produced and was composited using Adobe After Effects. This requires time, it requires dedication to the art and the vision.

Why did Tarantino choose this approach, why did he go through a process that took 33 artists, 1 year to complete, if we could have very well done with a live action production? After all, it was a $30 Million dollar production and what would a few more have done?

Imagine this, here is a story that has shaped the life of the antagonist, where I have to showcase myriad of emotions in a single frame, that not many actors can pull off (Sorry, Brando), in that ephemeral moment. Also, animation as a medium allows certain poses and stretches of anatomy that would require clever direction and very nimble actors. The task of hiring such characters to emote and who can also participate in the action scenes would be extremely difficult or would require months of prep and training to achieve the effect. In addition, creating a Set to transform into Yakuza infested times of Japan and just showing that amount of Blood and Violence would have been an arduous one. What seems simple just beings an impossible task, this is where the live action stops working, stops being effective and becomes powerless and the financial implications would have been ridiculous compared to what it was.

Also look at it from a practical side, if Tarantino the genius he is manages to create this using Live action, showing this in any other medium other than the way it was portrayed, would mean that a movie would have received an NC-17, which would mean restricted release in theatres and suddenly you are faced with a prospect of a commercial failure just because the director insisted on a cornerstone subplot in the movie.

Creative Director’s Counterpoint: Though it sounds like a brilliant strategy from Tarantino, I don’t think that was the rationale behind introducing the Japanimation (there is plenty of live gore and blood in the movie anyway without compromise). I do believe that the same emotions were achievable through live actions and masters like Kurosawa, Scorsese, Chan Wook, Deodato etc have shown us that. Being Artistically elite and stubborn was why he choose that medium to express. It was a new and fresh approach (derived from the old) to experience the same old sensation in a new way. Much like an addict who got tired of LSD and decided to find something new for his high. And boy, did it work!

But, for studios such as ours, it paved the way for inspiring us to advocate animation into the business world to tell stories, to portray emotions and to bring products to life. This remains our ‘raison d’etre’. As we move along we constantly inspired and awed by how animation has intertwined itself into mainstream entertainment and now into mainstream business communication.

For those who want to follow how this story came to life, don’t miss out on the amazing storyboard and the intricate details that I managed to find, for an animator, this is a life lesson, please pay attention to the detailed frames beyond keyframes, that a layman would appreciate.